On Sunday, we got up early. Eri made ozoni for breakfast, which is a soup made with a clear broth, sticky grilled mochi, chicken, carrots, and greens. We also had pork gyoza and shrimp shumai. 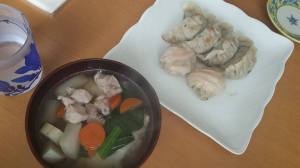 After breakfast, we headed out for Shibuya. We saw the statue of Hachiko, the loyal Akita, and the famous Shibuya crossing. We were able to get a seat upstairs by the window at  Starbucks to watch while people crossed. There were also many record stores (I miss record stores), and I bought myself a Kyary Pomyu Pomyu CD.

We walked through Shibuya on our way to the Meiji Shrine. Before getting there, though, we stopped in a little candy shop to look around. To our surprise, the workers were actually making the candy while we were there! The design they were making was for White Day, which is celebrated on March 14 and men give gifts to women who gave them gifts on Valentine’s Day. It was very interesting and we stayed for a long time to watch.

Then, we made our way to the Meiji Shrine. Walking through the gates was like walking back in time. I almost forgot I was in a city because everything was so green and peaceful. Before entering the shrine, we washed our hands outside. We also through coins into a series of slots and prayed. After, we each got an omikuji, which is a small piece of paper with our fortune on it. 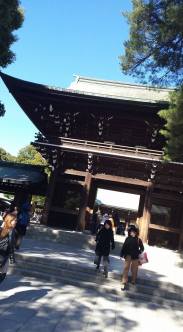 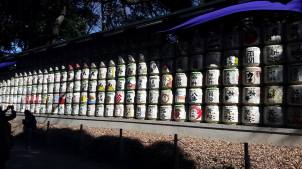 Next stop was Harajuku! Harajuku is a popular area in Tokyo where a lot of young people hang out. Takeshita Street is the main shopping area. Eri and I went to a purikura photo booth (we were definitely the oldest people there) and walked around looking at the shops. There is lots of interesting fashion from decora to goth and everything in between. 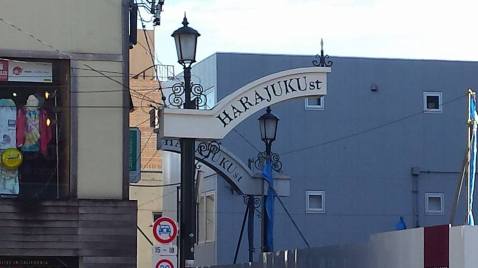 Then, we went to the Nezu Museum which houses the private collection of Nezu Kaichiru. Eri had never been before, so it was exciting for both of us. They had a special exhibit called Pine, Bamboo, and Plum: Auspicious Designs in Celebration of the New Year. There was also a beautiful collection of kimonos and other garments as well as a collection of ancient Chinese bronzes. I loved it so much! We also got to explore the sprawling gardens outside.

We were totally starving after walking around all day, so we decided to go for tonkatsu. The restaurant we found was traditional style, so we got to sit in the floor. We each got a giant piece of breaded, deep-fried pork cutlet (it was like butter), shredded cabbage, rice, miso soup, and pickled vegetables. It might have been my favorite meal in Tokyo. I’m not sure, though, since everything was so good! 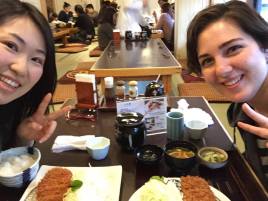 After walking around a little more, we headed back to Eri’s house. For dinner, her parents took us out to a conveyor belt sushi restaurant (kaiten-sushi). The place was massive and everything was self-service (you could make matcha at the table). In addition to the sushi moving around the belt, you could also order anything else you wanted from a touch screen at the table. It was some of the best sushi I’ve ever had. And I love sushi!

Day two in Tokyo was an enormous success.