Today, my morning was a little bit different than usual. One of my friends is taking some time off to visit family in Canada, so she asked me to cover for one of her morning classes. I said “sure” and she told me all I had to do was read some news articles with her students and discuss them afterwards. Cool, no problem.

I wasn’t ready for the incredibly enriching experience I found myself in.

The class was made up of five women: one about my age, the other four probably in their 30s or 40s. The first woman who came to class has actually been living in Australia for the past few years and was working as a welder! She recently quit her job to come home and study English, although she said she will probably go back to Australia soon.

The second woman to join was the one about my age. She was very shy and didn’t talk much. At 10 AM, we began reading our first article about prison inmates training dogs. Halfway through, a third (impeccably dressed) woman walked in. After she caught up, she couldn’t stop talking about it! She loved the idea and talked about how much she loved animals. She mentioned she grew up in the country and had dogs and chickens and goats. After her favorite cat died, though, she swore never to get another pet because it hurt too much.

At around 10:30, two other women joined. Our second article was about a little boy who saved his grandmother and Chihuahua from a burning house because he had learned to call the fire department because of a recent program at his school.

This led us to talking about education in both South Korea and America. I was very surprised to hear that most of the women do not like how much is expected from Korean students regarding academics. The woman from Australia had very strong opinions on the fact that children  are pushed so hard and go to bed so late. She thought that kids need more time to just be kids.

This was also coming after the most important day for students in Korea. Yesterday, November 12, high schoolers took their college entrance exams. This is taken so seriously that businesses are not allowed to open until the exams are finished and even planes have to be grounded or rerouted as to not distract testers.

After, we moved on to talking about technology. It was interesting to see the love/hate relationship. Some of the women really like how easy smartphones make it to find information and talk to family and friends, while others think that it’s too distracting and making us lazy. Their English was very good and we had a really insightful discussion.

They also began talking about how things were 20 and 30 years ago and how much has changed since then. One woman kept saying how the past is the past and we have to live in the present, and another asked her if she was a liberal. She said she was and proceeded to tell everyone how she constantly fights with her super conservative father-in-law. It was great.

Near the end of class, everyone asked me about where I’m from, how I’m liking Korea, etc. Naturally, we just ended up talking about food. They asked what my favorite Korean dishes were and if I like to cook.

It was a really fun class and I loved hearing so many different perspectives from Korean women. I never thought I would enjoy an adult class, but I had such an excellent morning!

Children who do not respect their elders are dealt with very seriously here. In fact, judging by what I just witnessed at work, I would go so far as to say corporal punishment in schools is alive and well in Korea.

I had been having a very difficult class earlier this afternoon. Two of my students absolutely refused to pay attention or do any work. The same two students have been giving me trouble for the past few weeks. Today, though, I was very tired of them talking while I was talking, poking other students, not speaking any English (in English class, mind you!), and audibly laughing every time I wrote something on the board or had my back turned.

That was the last straw. I told both of them to stand up and that we were going for a walk downstairs. Immediately, the pleas of “sorry, teacher! Study!” came pouring out of their mouths. Nope. The head Korean teacher was going to deal with them. We walked downstairs and I handed them off to her. She was not amused.

I stood in shock as I watched what happened next. The head teacher balled her hand into a fist and punched them both in the side of the head. Hard.

I was expecting a 100 lines of “I promise to listen to my teacher.” Or something. Anything, really. Just not that.

The head teacher asked me to return to class, where I drilled the rest of my students on verbs, nouns, and adjectives. Through the window, I could see my other two students standing outside the door with their arms raised above their heads while the head teacher yelled at them.

I wanted to cry.

After class, I returned to my desk where I began planning for some tests on Friday. A few minutes later, the students who had been punished came in to apologize. I thanked them for their apology and told them to be good next class.

I think I am mildly traumatized. Actually, genuinely distressed.

I really don’t know what else to write.

I leave for Korea in four days. It’s really crept up on me quickly.

Thursday was my last day at my retail job, and it was bittersweet. I’ve met so many wonderful people there the past year, and I’m a big mush so I spent the evening taking pictures and singing and hugging everyone. 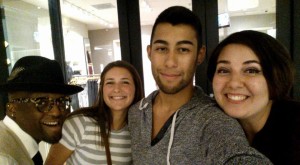 On Friday, I got to see one of my friends whom I hadn’t seen since November. We both have busy schedules, so we met up for an early dinner in New Brunswick at this place called Stuff Yer Face. We had custom strombolis, yummy fishbowl drinks, and this banana caramel concoction for dessert. After dinner, we took a walk around and got some bubble tea. 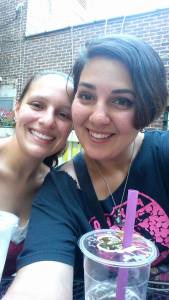 Kate and I with our bubble tea!

Last night (Saturday) was my [official] going away party. My friend Brittany came down the shore from the City and we went to the pool, got ice cream, and caught up. She also got me the loveliest Moleskine notebook so I can write about my adventures on paper! Later, we went to Asbury Park at the Asbury Festhalle and Biergarten. It was the most beautiful night, so we found a spot on the roof garden and got some beers. My friend Kait met us shortly after we arrived and she staked out a table. Everyone else was on their way, or trying to find parking, which is absolutely no fun to do in Asbury Park on a Saturday in the summer. My friends Christine, Amanda, Matt, and Ken also met us. After drinks, everyone decided it was only fitting that we go to MOGO Korean Fusion Tacos, right around the corner. I had never been there, but I got a Korean beef burrito and tried three different types of kimchi: cabbage, daikon, and cucumber (I liked the cucumber best). 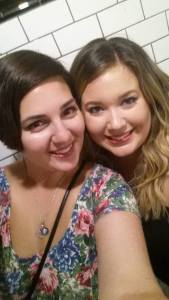 Amanda and I at the biergarten. 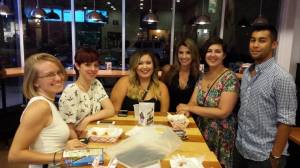 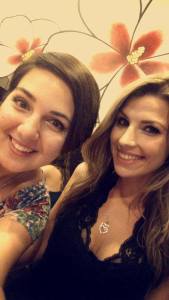 Christine and I at MOGO.

It was SUCH a fun night, and I’m so happy to have seen and celebrated with everyone.

I’m still packing my suitcases, but it’s the final countdown.

I have officially completed my TEFL certificate! That’s 140 hours (professional), plus an additional 10 hours for one-on-one teaching.

The in-classroom part of the course was held in New York City, near Wall Street. There was a group of about 8 students, myself included, from all over the country: Nebraska, North Carolina, Virginia, Ohio. It was so great to see so many different people with the same goal assembled in one place.

Our teacher, Teresa Jacobs from i-to-i, was PHENOMENAL. She really embodied everything a TEFL teacher is supposed to be: enthusiastic, engaging, knowledgeable, helpful. The classes were long, 9 hours/day on both Saturday and Sunday, but it was totally worth it.

We did lots of lessons and drills and had opportunities to teach the class lessons we came up with ourselves. I feel like I acquired a lot of helpful information over the weekend and I met some really fantastic people, too!

It would be great to meet up with them if we’re all in Korea at the same time.

Getting all my documents together for EPIK is really starting to get to me.

First of all, I need to get my undergraduate diploma notarized, then apostilled, in order to send it in to EPIK. However, I went to a private Catholic University and my diploma happens to be in Latin. Apparently, you can’t get something notarized if it isn’t in English.

I have contacted several banks, the county chair, UPS, and FedEx.

I have also left a voicemail and sent an e-mail to my University’s Registrar.

Waiting for a response, but I’m not holding my breath.

Then, I need my TEFL certificate. However, I am not completing my in-class component until June. I asked my accrediting school to provide me with a letter, which I forwarded to my KorVia recruiter, and am waiting to find out if it will be sufficient until I complete the 20 in-class hours.

At this point in time, I have been invited for interviews with the following programs: EPIK, Aeon, and Amity.

EPIK is my first choice right now, but I am certainly keeping my options open.

Will I be able to get Oreos abroad? Will they cost me an arm and a leg? And Heinz ketchup? Burritos? Bagels? Pizza?? (Being from New Jersey, bagels and pizza are incredibly high on my list of necessities.)

Anyway, was some food for thought. And now I will proceed to watch Bob’s Burgers.