Hi everyone! I apologize for the lack of updates – I have not forgotten about the DO YOU YOGA 30 Day Challenge! Life and work have just been super crazy for the past few days. Here are the videos I’ve done:

I have no complaints about any of these videos, and I am feeling more flexible every day. Today’s video, “Yoga to Restore,” was slow, but my body definitely needed it. It was very soothing and provided some deep stretches. I also repeated days 13 and 17 for fun. I just wanted a little more from my workout.

On Sunday, I went into Manhattan to visit my friend Brit. We went to MoMA to see A Revolutionary Impulse: The Rise of the Russian Avant-Garde. It was a wonderful exhibit and featured works by El Lissitzky and Kazimir Malevich, two artists I really enjoyed while I was studying art history in college. We also saw Francis Picabia: Our Heads Are Round so Our Thoughts Can Change Direction. It was a retrospective and I found it to be absolutely brilliant. I wish I had taken more pictures.

For lunch, we went to a Korean BBQ place called Jongro. We had samgyeopsal, tteokbokki, and haemul pajeon. Everything was very authentic and delicious. We also wandered around a bunch of Korean cosmetics stores and went into H-Mart so I could buy some snacks I missed!

How is your week going?

On Sunday, we decided to go back to Ssamziegil. On the way, we stopped at a very cute little cafe for coffee and a bagel for Steve (it’s hard to find bagels here, which is unfortunate). We did some browsing and I knew I wanted to find a shop to get a 도장 (dojang). A dojang is a traditional stone or wood stamp engraved with your name.

I saw a little shop with many samples outside, so we went in. After looking at all of them, I decided on a small stone stamp with a purple ladder and a moon at the top. I gave it to the shopkeeper and she had me write my name on a sheet and I had the option of choosing a design – I picked a whale because it is the animal of Ulsan (the city I’m living in). I paid 33,000 won (about $28).

The shopkeeper told me to come back in 30 minutes, so Steve and I walked around until then.

I was so happy with the finished product! It even came with a soft case and two cards with my design stamped onto them. I love it so much.

After picking up my dojang, Steve and I went back to Ssamziegil. I made him take pictures in a photo booth with me. Photo booths here are so cool! They are much bigger than at home, and you stand up inside instead of sitting down. They take six photos, and then you exit the booth where you can decorate all your shots on a big computer screen. It was so much fun!

Then, we found the basement, which is actually set up as working artists’ studios. People could also make crafts with the artists like spinning or painting pottery. There were also lots of food stands and we got delicious deep fried mandu and little cakes filled with Nutella.

After Ssamziegil, we headed over to the National Museum of Korea. Steve was exhausted, so he sat while I did a walk-through. Admission was free and the permanent collection was very impressive. There were prehistoric galleries, Medieval galleries, painting and calligraphy galleries, and sculpture galleries. The top floor was dedicated to arts of Asia including works from China, Japan, Tibet, and India, among others. Everything was really beautiful!

After the museum, we were starving, so we set out to find food. We had really wanted Korean, but the first place we saw was a Quiznos and we said “screw it” and got sandwiches. They were actually really satisfying.

After lunch, we went across the street to the KTX and took the train home. We were so incredibly exhausted! Overall, though, it was an amazing Christmas vacation in Seoul. I can’t wait to go back!

Chuseok (추석) is a national holiday celebrated in Korea. It is a harvest festival which falls around the autumn equinox, on the 15th day of the 8th month of the lunar calendar. From what I’ve been told, Chuseok is most comparable to American Thanksgiving. Koreans spend this holiday with their families in the towns of their ancestors and eat traditional foods.

During this time, it is also customary to give gifts. For the past few weeks, I have been seeing many different gift baskets and specialty items popping up in the supermarkets. Some of the most popular ones I’ve seen include Spam (yes, that Spam), oil, and soy sauce. I’ve also seen stations set up selling what I think are little sweets (rice buns and something that resembles a brittle).

Chuseok also means that I get a four day weekend.

So, Steve and I decided to take a short trip to Gyeongju on Sunday, which is roughly an hour by bus north of Ulsan. However, it took nearly three hours for us to get there because of all the Chuseok traffic. 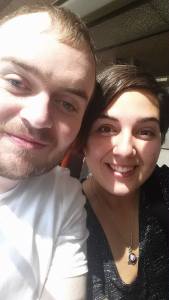 Steve and I on the bus.

It was hot and uncomfortable, but we made it there in one piece. Our first order of business was to visit the Gyeongju National Museum and after jumping in a taxi, we quickly learned that the city sights are very spread out. We arrived at the Museum and, to our delight, there was no admission fee. There were also games set up for children and their families to play because of the holiday.

We parted ways and went on to explore the Museum, which was made up of several large buildings (with lots of stairs) and galleries. Most of the galleries were dedicated to Silla art. The Silla Kingdom was one of the Three Kingdoms of Korea and was ruled for nearly 1,000 years.

Below the main complex, there was also a beautiful structure surrounded by a lovely little pond. We took a walk down there for a closer look. 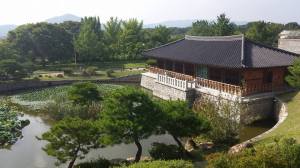 After the Museum, our plan was to visit Bunhwangsa Temple, a temple from the Old Silla Era. However, we might have had a hard time trying to find a taxi. So we walked. And walked. And it was rather hot out. Finally, we saw a taxi approaching and we waved it down. Too bad it already had passengers and they waved and laughed as they passed. With no map and no WiFi, Steve and I had absolutely no idea where we were. So we just kept on walking.

In the distance, we saw a bridge. As we got nearer, we heard music. We couldn’t tell if it was a recording or live, so we just followed it until we stumbled upon Gyochon Village. Gyochon Village is a traditional hanok village that offers glassmaking classes, pottery workshops, quilting, and tea ceremony training. They were having a festival for Chuseok complete with live music performances, costumed performers, and more games. It was so wonderful! We spent a good amount of time there before grabbing some water at the cafe and trying to find our way back downtown.

Today, I went on my first excursion outside Ulsan. Nick and Hailey invited me to go to Busan with them to see a Studio Ghibli exhibit at the Busan Museum of Art. We left around 11 AM and took the bus, which cost 4,400 won. The ride was about 45 minutes and we got off in Haeundae.

Busan is a very large coastal city, with a population of about 3.4 million. I’ve been meaning to visit since I arrived, and I was very glad to go today. We took the subway, which is extremely clean and efficient. I purchased a reloadable transit card at 7/11 which is good for the subways and buses. A ride is only 1,200 won.

The museum was a short walk from the subway station, after you climb several precipitous staircases that will leave you gasping for air once you reach the top. Or maybe that’s just me. We got to the museum and made our way to the exhibit.

At the Studio Ghibli exhibit.

It was very beautifully done, featuring many original sketches from the films as well as lots of models of building featured in the films, as well. It was really pretty magical. Photography wasn’t allowed, but I snuck a picture of a scene from Howl’s Moving Castle. There was also several rooms dedicated to Spirited Away, one of my favorites, with some life-size reproductions from the restaurant scene.

The only thing I found incredibly bizarre about my first museum experience here is that Koreans really seem to enjoy lines. Whenever you moved into a new gallery, people would literally line up at the beginning and wait in line to view everything in the room. I have never seen anything like that before.

Anyway, following the exhibit, we decided to go to lunch. We ate at a restaurant that served cold noodle soup that came with thinly sliced beef. We also shared an order of delicious, delicious dumplings.

Not a great picture of my cold noodle soup.

Then, we took the subway to the famous Haeundae Beach! It was cloudy, but that didn’t stop us from picking up an order of fried chicken at Bonchon and making our way over to the beach. It was FREE to get on, something that totally blew my mind because I spent $9/day getting onto the beach in New Jersey all summer. We found a nice spot to put down our towels, ate our chicken, and just relaxed. I may or may not have fallen asleep for a while. I didn’t go in the water or anything, but the views were phenomenal. Mountains, cityscape, islands, everything.

After the beach, we took the subway to another part of Busan to grab a beer at Galmegi Brewing Company. There were more stairs leading up to the bar, but we got a lovely seat at the window and enjoyed some good brews. I had one called the Campfire Amber.

It started drizzling as we were leaving, but figured we would still head back to the museum because they were doing a free screening of a Miyazaki film at 7; we didn’t know which one. It was outside on the lawn, and we got some spots. Turns out, they were showing Howl’s Moving Castle, which I’ve never actually seen. Obviously, it was in Korean with no subtitles, but that was fine. Too bad the skies opened and everyone began to leave *sigh*

We grabbed our things and left, too, but not before Hailey and I went to the restroom only to discover that neither of us had toilet paper in our stalls. Dammit. Apparently, that’s a thing here. Not to have toilet paper in public restrooms. Even really nice ones in museums.

We decided to catch a bus back to Ulsan, and that’s where I am now. Exhausted out of my mind, but so happy to have had such an incredible day.